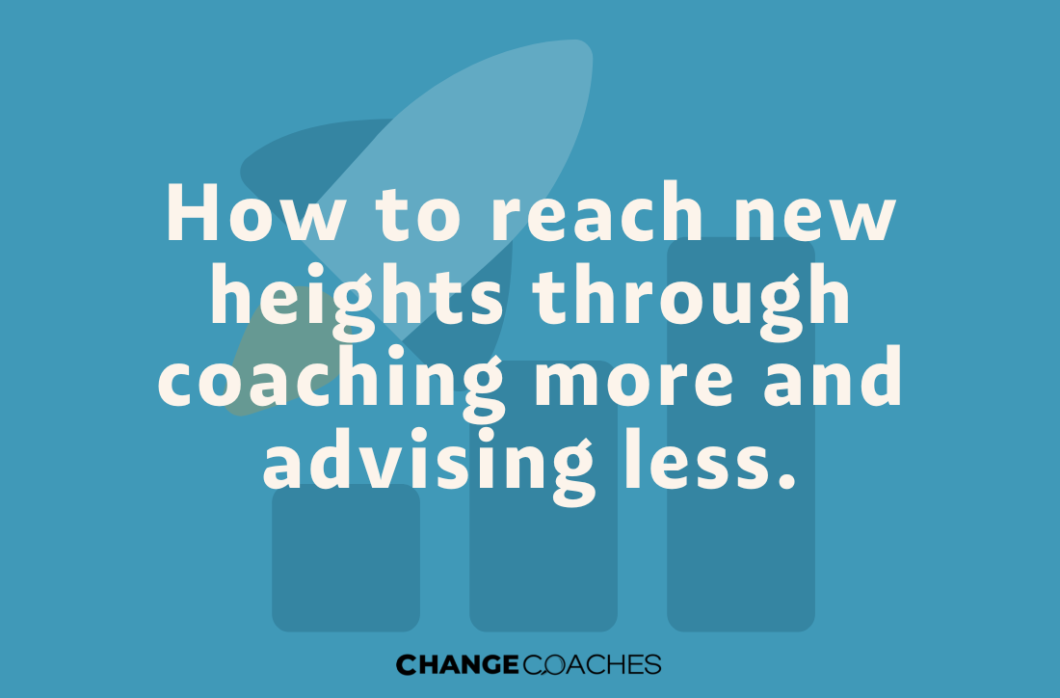 While coaching and advising are often conflated, they are two different types of interactions with different levels of impact. This is an important distinction in the workplace that we should all care about. Why is this and how can we bring more coaching into our daily actions?

Coaching is an empowering way to grow and develop employees and, eventually, create long-term behavioral change. It involves asking people questions so they can determine what is right for them. Coaching is extremely valuable. Here are a few examples of outcomes that coached employees reported (Source: Consulting Psychology Journal):

Advising is also valuable but in a different way. When you advise someone, you are telling someone what to do. Due to its directive nature, advising is quicker and more direct than coaching so people naturally gravitate towards it. Advising is also easier. Telling someone something is more straightforward than collaboratively exploring it with them. In a nutshell, advising is telling; coaching is compelling.

Generally, leaders are intrigued by coaching and the benefits it brings to organizations. However, they often overestimate the frequency and quality of their coaching interactions. Take this illustration as an example:

Claudia is upset about something that Rohan, her co-worker, said to her in a meeting. Claudia discusses the matter with her boss, Jane, and she decides to coach Rohan. His behavior has become a pattern.

Jane responds to the situation with some urgency and reiterates to Rohan that he needs to respect his peers. She ends the meeting by providing Rohan with a list of directives.

The next morning, Jane updates Claudia notifying her that she believes Rohan is “on the right track.” Jane also shares that, amongst other directives, she provided Rohan with a list of next steps. She believes that her “coaching” will fix the problem.

A couple of points about this interaction. First off, Jane mistakenly thinks that she coached Rohan but she actually advised him. She knew exactly what she wanted from Rohan and mandated it. In Jane’s mind, the urgency of the situation dictated that she take an advising approach and use her position of authority to tell him what to do. Secondly, while Rohan will probably follow Jane’s directives as it relates to Claudia, it is likely that he will quickly fall back into his familiar hostile behaviors with others. If Jane would have truly coached Rohan, she would have created an opportunity to generate longer-term shifts in his behavior.

This experience is all too common. Leaders often want to coach more and advise less but, in reality, they are doing the opposite. So, can more balance be achieved? Here are a few tips:

It takes time and practice to grasp the difference between coaching and advising interactions but you can start small. Keep in mind that advising is telling and coaching is compelling. If you find yourself advising the majority of your time, build a bank of questions and slowly make the shift.